The Berlin Cluster of Excellence UniSysCat honored Dr. Maria Escudero Escribano from the University of Copenhagen with the Clara Immerwahr Award. Prof. Dr. Beatriz Roldan Cuenya gave the laudation. As part of the award, Dr. Escudero Escribano and her students will spend time at the FHI in Berlin within the Department of Interface Science. 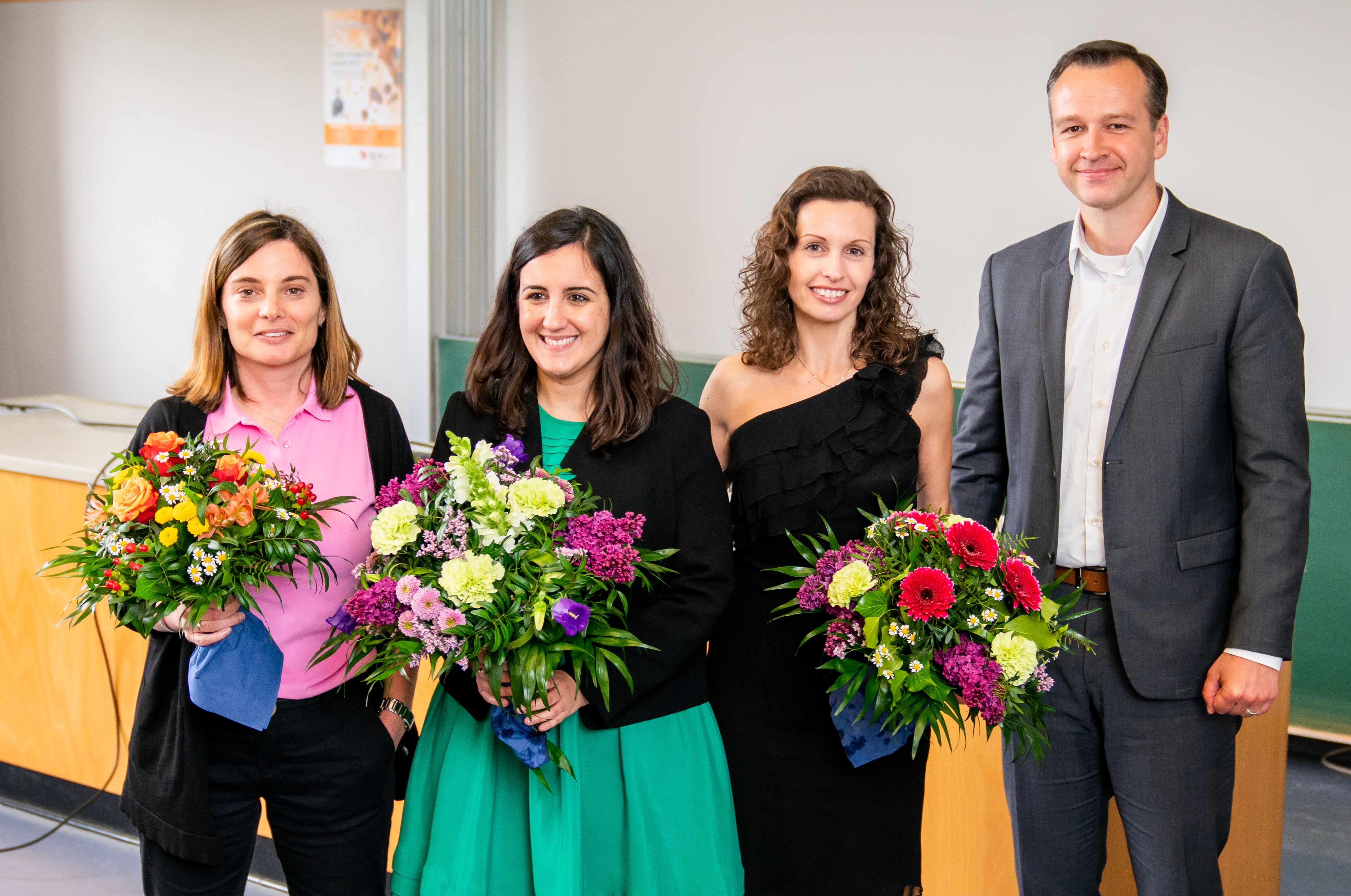 The Berlin Cluster of Excellence UniSysCat and the Berlin University of Technology (TU Berlin) honored Dr. Maria Escudero Escribano from the University of Copenhagen with the Clara Immerwahr Award on May 03rd, 2019 at TU Berlin.

The awardee delivered a talk on tailored electrocatalysts for energy conversion and production of renewable fuels and chemicals, which was followed by a guest lecture held by Prof. Dr. Clémence Corminboeuf, École Polytechnique Fédérale de Lausanne (EPFL) on quantum machine learning to discover new homogenous catalysts.

Dr. Marίa Escudero Escribano (Cáceres, Spain, 1983) graduated in Chemical Engineering from the University of Extremadura (Spain). In 2011, she obtained her PhD in Chemistry from the Autonomous University of Madrid (Spain), during which, she spent two research stays abroad, at Argonne National Laboratory (USA), and Ulm University (Germany).

In 2012, she started her postdoctoral research with Prof. Ib Chorkendorff and Dr. Ifan Stephens at the Technical University of Denmark, where she investigated novel electrocatalysts for the oxygen reduction reaction in fuel cells. She discovered that Pt-lanthanide alloys are very efficient catalysts for this reaction, and their catalytic properties can be controlled by tuning the Pt overlayer structure (Science, 2016). In 2014, Prof. Escudero Escribano was awarded the ‘Sapere Aude: Research Talent’ Grant (Danish Council for Independent Research).

Since March 2017, Prof. Escudero Escribano is a tenure-track Assistant Professor at the Department of Chemistry and the Nano-Science Centre at the University of Copenhagen. Her group investigates tailored electrochemical interfaces for sustainable energy conversion and synthesis of clean fuels and high-value chemicals.

The first time the Clara Immerwahr Award was given was in 2011. Its aim is promoting equity and excellence in catalysis research fostering young female scientists at an early stage of their careers. The award is dedicated to Dr. Clara Immerwahr (1870-1915), who was the first woman in Germany to earn a doctorate in Physical Chemistry in 1900. Clara Immerwahr married Fritz Haber in 1901. Later on, Fritz Haber became the founding director of the Kaiser Wilhelm Institute for Physical Chemistry and Electrochemistry, which was renamed after him in 1953.

The Clara Immerwahr Award is conferred annually to a young female scientist at an early career stage (postdoctoral fellow, junior researcher, assistant professor) for outstanding results in Catalysis Research. It is associated with a financial support of 15.000 Euro for a research stay within one or more of the UniSysCat groups, and thought to establish close collaborative links with UniSysCat researchers.